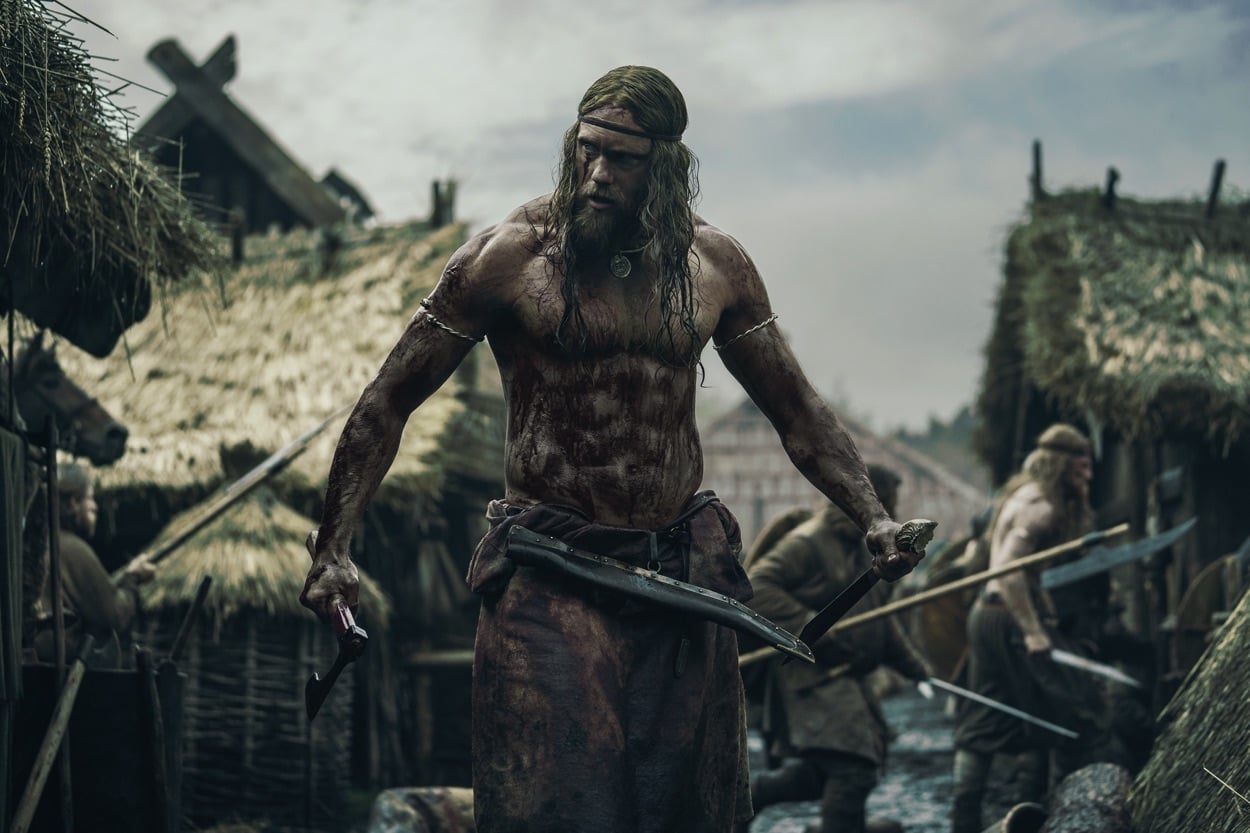 Aryans assemble! Hollywood’s most Nordic get together for The Northman, Robert Eggers’ latest exploration of arcane mindsets, and the sort of film that’s probably on a loop at White Supremacist HQ.

The men are tall, blond, hairy and sculpted, the women are fierce, brave and yield only to their liege-lord husband. There is dirt, there are runic inscriptions, there is lore and there are any number of other tokens of authenticity. It’s the hipster version of The Vikings, the one that starred Kirk Douglas and Tony Curtis, made in the days when no one particularly minded a pair of New York Jews playing characters out of the Nordic sagas (though there were sniggerings at Curtis’s accent).

In a world that cannot be sated when it comes to this sort of thing – Game of Thrones and Tolkien, endless TV series set up some fjord somewhere (Norsemen, Vikings), fantasies involving Thor, or Anna and Elsa from Frozen – something like this was always on the cards. Here we get the Spartacus/Ben-Hur/Gladiator story again – the fine noble born to high estate who is robbed of his birthright and then, having been busted down to rude slave status, has to fight to claim it back, the ultimate showdown being the face-off with the bastard who disadvantaged him so. A literal bastard in this case, in the shape of Fjölnir the Brotherless (Claes Bang), the illegitimate child of Queen Gudrún (Nicole Kidman), or was it King Arvandil War-Raven (Ethan Hawke)? It gets confusing. Whichever one bore or begat the bastard, the basic shape of the story holds true to template.

But, like some hero of Old Icelandic legend put to trial by ordeal, Eggers’ story finds itself hanging fatally in space, unsure if it’s an ethnographic treatise on the world and mindset of the Vikings, or whether it’s a Hollywood epic of the old school.

There are great things. Alexander Skårsgard as Amleth (whose story became the template for Hamlet, apparently), the gigantically muscled king’s son fighting his way back to the top. Anya Taylor-Joy in a bolted-on love-interest story as Olga of the Birch Forest. Claes Bang is unrecognisable as his bastard brother, and is excellent also, resisting the urge to twirl a metaphorical moustache and imbuing his character with some sympathy. Gustav Lindh also does well, as the usurper’s horrible, entitled son. But top honours go to Nicole Kidman, who has decided that the way to go with her pretty minor role – queen, consort, mother – is to aim for the back of the room. Lovely, unhinged stuff, recalling that mad acting she did in The Paperboy.

She gets it just right. No one else is quite sure if they’re playing big characters or aiming for something more authentic. She covers all the bases, all at the same time. Talking of which, Eggers’ attention to detail is remarkable. There is research hanging off this film at every turn. Sailors with proto-oilskins. A warrior who can snot out the front of his nose thanks to a battle injury. Finnr the Nose-Stub, they call him. A shamanistic ritual involving hallucinogens. Runes as chapter headings. “Berserkers” who go into battle out of their minds on drugs. Everyone speaks in a cod archaic tongue, halfway between modern Scandi and Middle English – all rolling R’s and no central vowel left unstressed.

For all its noble intentions, this parading of background work which should remain hidden doesn’t help to keep things moving. It’s Eggers gone wrong. He was so good in The Witch at situating us inside the minds of a god-fearing family whose pubescent daughter’s blossoming is seen as the Devil’s work. A little less so in The Lighthouse, where Robert Pattinson and Willem Dafoe went mad in the isolation of an enforced stay on a rock out at sea, and things got a bit more gothic.

In The Lighthouse at least things got kind of funny, in an over-the-top, you-cannot-be-serious kind of way. That’s not the case here. Strangely, Nicolas Winding Refn did it all so much better – both the mindset and the spectacle – on a fraction of the budget in 2009’s Valhalla Rising. For Nordic wow factor, that’s where I’d be looking.


The Northman – watch it/buy it at Amazon

Director: Robert EggersWriter: Sjón, Robert EggersStars: Alexander Skarsgård, Nicole Kidman, Claes BangSummary: The Viking Age. With a mind aflame with hate and revenge, Prince Amleth, the wronged son of King Aurvandill War-Raven, heads to cold, windswept Iceland to retrieve what was stolen from him: a father, a mother, and a kingdom. And like a war dog picking up the enemy's scent, brutal Amleth embarks on a murderous quest to find the hateful adversary, whose life is forever woven together with his by the threads of fate. Now, in the name of Valhalla, no one can stop the Northman, not even God. ?Nick Riganas