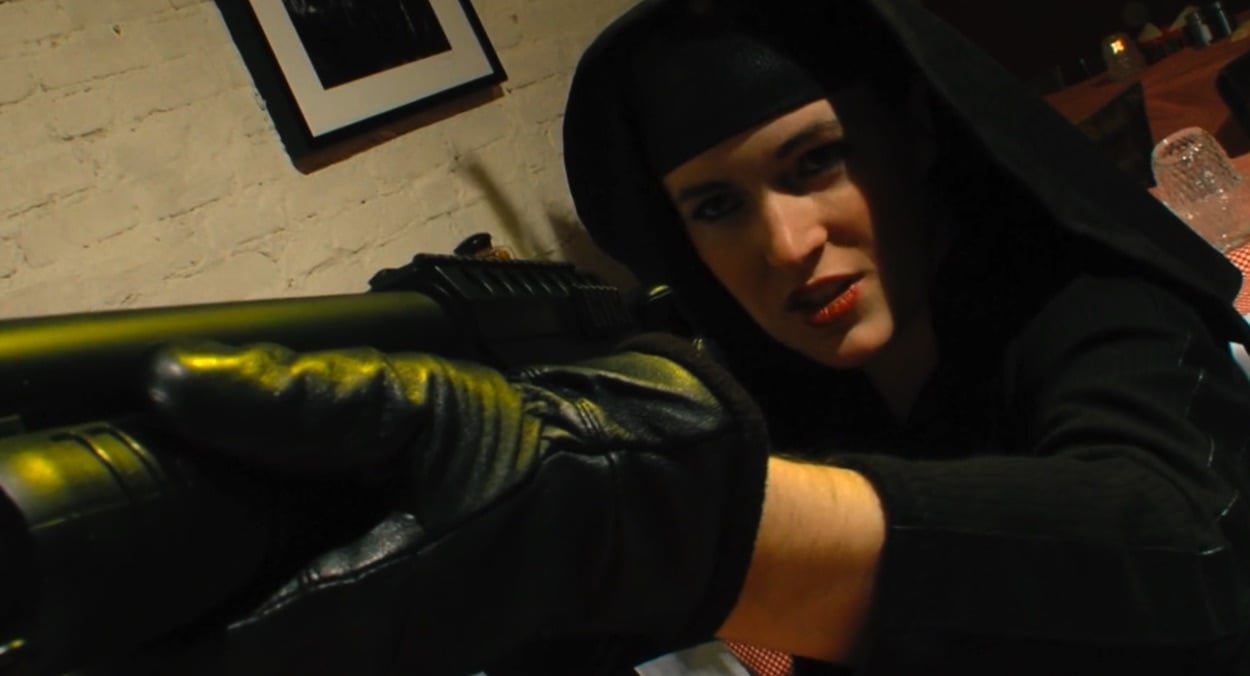 A film called Nun of That with the tagline “A blast for you and a blasphemy”? That’s two good reasons to watch right there. A third is that this is a funny (scrappy, admittedly) film wandering all over the dividing line between exploitation and satire.

The action gets going in a strip club where a hitwoman disguised as a poledancing nun is shaking her ass at a roomful of appalled gangsters. These guys have all been raised as good Catholic boys and the sight of a gyrating bride of Christ is not helping the spaghetti and meatballs go down. Relief, of a sort, soon arrives, when the nun pulls out an automatic weapon and delivers some penance, and director Richard Griffin delivers his first bucketful of splatter.

The nun, Sister Envy, belongs to a shadowy supernatural organisation dedicated to “fighting crime and keeping the world safe from evil”, who have soon recruited this film’s hero, a feisty nun called Sister Kelly (Sarah Nicklin), who on being booted out of her convent is recruited by the Order of the Black Habit and rechristened Sister Wrath. One training sequence later – mentors include Mahatma Gandhi and Moses – and Sister Wrath is on her first mission, to deal with Riccardo Corbucci (Brandon Luis Aponte), a mobster who we have just met pushing a priest’s hand into a manual mincing machine. More splatter.

Along the way we’ve also met Sister Wrath’s guardian angel, Oscar (Luis Brandon Aponte, not to be confused with the guy playing Corbucci, who has the same names in a different order). And we’ve met Jesus (Michael Reed), a deity who enjoys a glass of wine and who is introduced in the film’s only musical number, a synth-driven catchy thing of a sort Soft Cell might have written.

It’s all good fun, and it’s great to see a film-maker going at his material with a sense of reckless glee. The acting is wobbly to terrible but it’s OK when it matters. There are good jokes sprinkled through. And there are punchy side characters, like Sister Lust (Shanette Wilson), a blaxploitation-flavoured gal with a big afro who is introduced by Father Thomas (Jason McCormick) thus: “Sister Lust, how do you like your sausage?” She replies: “Hot, thick and juicy.” Groan, wink.

By now you probably know whether you want to watch this film. In case you’re still wavering, the Pope appears at one point (“Dude, it’s the fucking pope. Can you believe that shit?” exclaims Sister Lust). Gang boss Corbucci himself has a boss, Momma Rizzo, a woman played by a man in drag (Rich Tretheway). And there is a Jewish hitman called Viper Goldstein (David Lavalle Jr) who practises a form of martial arts called jew-jitsu.

Griffin again straddles a line here, resurrecting memories of the ancient antipathy of Christians towards Jews with a running gag about the Jews having killed Christ. Though his most wounding barbs are reserved for the Catholic Church. The one about how you get a Catholic priest hard is particularly funny/tasteless.

But really, all that to one side, it’s all those movies full of interchangeable rentagangsters that are the target, and Griffin’s fondness for bloodletting is evident. Looking at his back catalogue, he debuted with a splattersome reworking of Shakespeare’s Titus Andronicus in 2000 (obviously not to be confused with Titus, from the previous year, starring Anthony Hopkins) and since then has delivered films with titles like Splatter Disco (2007), Accidental Incest (2014) and Flesh for the Inferno (2015).

Nicklin is good casting as the sour badass nun Sister Wrath, which is handy because the film hangs on her performance, though Shanette Wilson is also impressive, as if she might at any moment take over from Nicklin. Luis Brandon Aponte (not to be confused with… ) also cuts through as Oscar, underused though he is.

Griffin’s aim is to entertain and appal at the same time. Nun of That is like a John Waters film of yore. It knows exactly where the line between good and bad taste is and then disregards it entirely. Now and again, that’s exactly what you need.

Nun of That – Watch it/buy it at Amazon