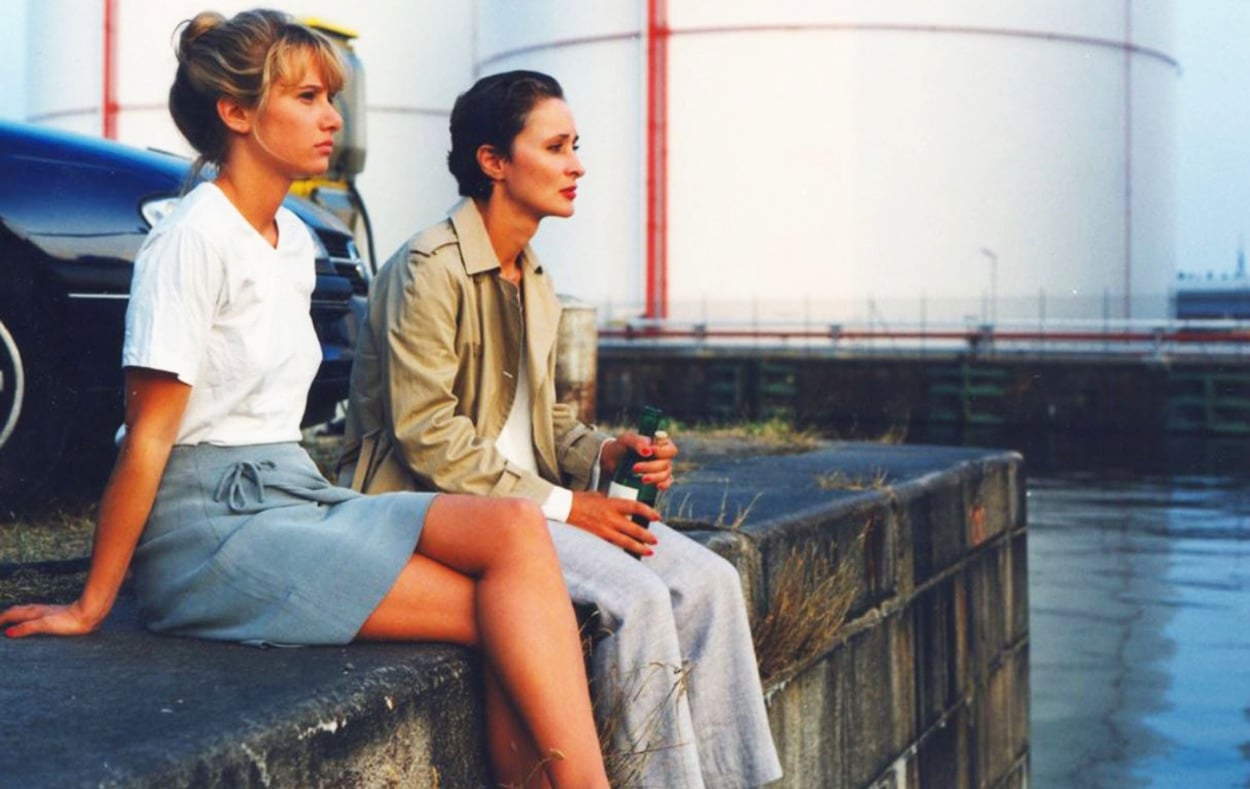 Pilots (Pilotinnen) was Christian Petzold’s graduation film, a short feature-length drama which he completed in 1995. At 35, Petzold was quite ancient as students go but he’d studied German and theatre already before switching into film at Berlin’s DFFB. Either way, his film got a showing on the German TV channel ZDF, which isn’t bad at all for a graduation movie. It’s clearly the work of someone who technically is still learning how the vehicle works but thematically knows exactly where he’s heading. It’s not so much Petzold in utero as Petzold in miniature.

It’s a two-hander, in essence, and once Petzold has thrown us with an opening shot suggesting that his troubled heroine (and it nearly always is troubled heroines with Petzold) is something to do with flying – a pilot or air crew maybe – he pulls back to reveal that Karin (Eleonore Weisgerber) is in fact a rep for a company that sells fragrances. A company called Blue Eyes, an oblique reference to Frank Sinatra who, in the film, has just died (which is cheeky because Sinatra wouldn’t die for another three years), and whose music keeps popping up as things play out.

Karin, like many a future Petzold female, is trying to escape – to Paris, out of her job, with a mysterious man – but is held in place by the demands of earning a living, demands which are doubled when Junior, her new boss, decides to increase her sales targets and pairs Karin with Sophie (Nadeshda Brennicke), a pretty young thing he is also sleeping with. The idea, Karin instantly grasps, is that Sophie is her replacement and that her own days are numbered.

But Sophie has beef of her own, not least being the boss’s plaything, and in any case, as she heatedly points out to Karin when matters come to a head, you don’t sleep with the boss only to become a sales rep. Or maybe you do, as Sophie is beginning to suspect.

A nicely observed daggers relationship develops, the older woman holding the younger at scorn’s length, the younger reciprocating, until something slightly unexpected happens and a faint shadow of the film Thelma & Louise (which was only four years in the past at the time) starts to form. The ladies gain wings, learn to fly. It’s Pilotinnen in the orginal German, female flyers.

Petzold’s love of the French New Wave is evident, from his editing, choice of shot and angles, as well as his insistence that the audience do some of the narrative work. And he’s confident enough to demand different performances from his two leads. Weisberger is doing it all with a look – the world-weary older woman who’s seen it all before – while Brennicke puts in a much more physical performance as the younger woman full of piss and vinegar.

Is Pilots underwritten, or has it just been cut a bit here and there – perhaps for TV length? It’s hard to say. But in spite of the odd unscheduled halt it’s got something that sets it apart while it’s also obviously of its time. The look, for example, that blue/yellow mid-1990s palette. But in its depiction of women operating in a man’s world and doing whatever it takes, it is in territory that hadn’t been over-explored at the time (perhaps that’s why Petzold is nodding to Thelma & Louise?). Frank Sinatra’s world, of Ol’ Blue Eyes, the Chairman of the Board, in which women are ornamental rather than functional, except as sexual objects, which Karin (aware that she’s running out of allure) and Sophie (nipples always discernible through her sheer top) both feel keenly.

If you want a Petzold Starts Here jumping-off point, Pilots is it. A film with the themes he’d later explore in depth, his own style of saying a lot by not saying very much at all, of show-don’t-tell stories, of struggles that seem almost everyday and yet have an almost mythical quality. It’s all here.