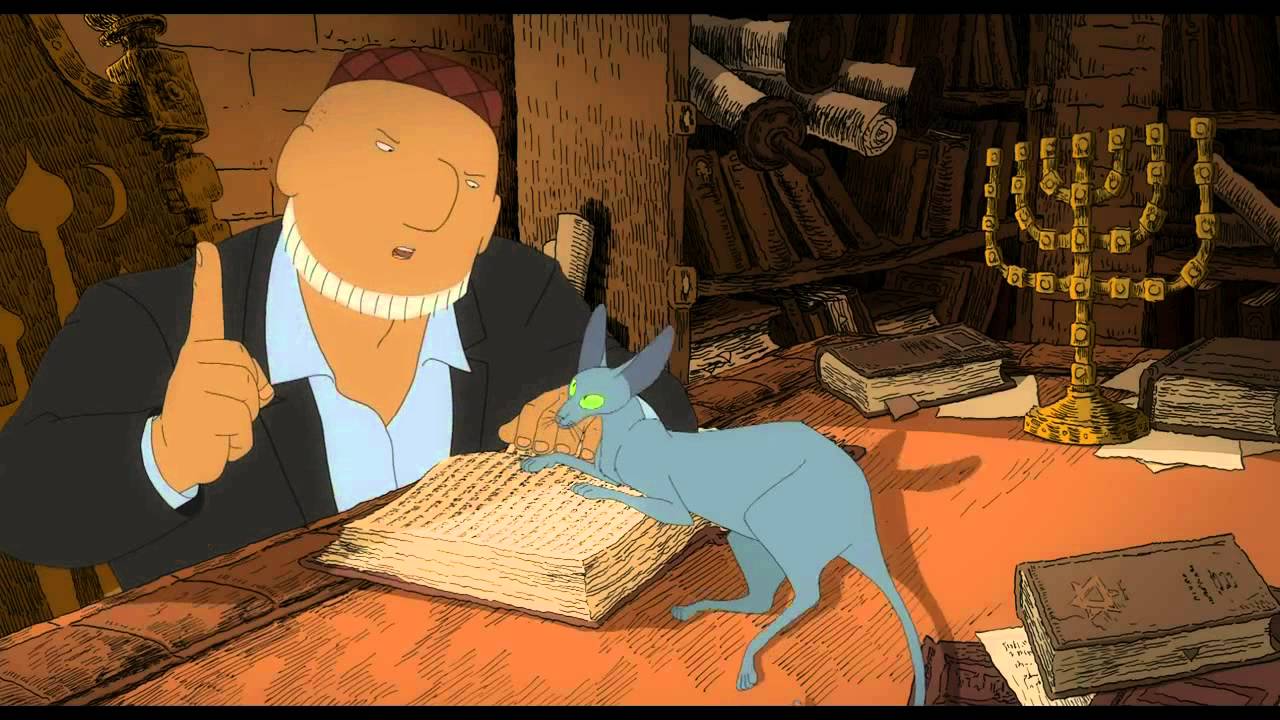 It’s a bit all over the place, The Rabbi’s Cat. That’s part of its charm and is potentially also a bit of a problem for people who like their stories topped and tailed, neat and tidy, starting off in with a destination in mind and then eventually arriving there.

The piecemeal nature reflects its origins as a series of comics by Joann Sfar, who, with co-director Antoine Delesvaux and writer Sandrina Jardel, has opted to take a bit from here, a bit from there in an attempt at a greatest-hits compilation of the good stuff.

But what if you don’t know the hits? Things you need to know are that it’s in French, it’s an animation, its gorgeous style is a brew of 1950s TV’s The Adventures of Tintin plus a bit of Studio Ghibli by way of Vincent Van Gogh – all those stars and trees with wavy bark – and it starts off with a thumb of the nose to Disney by introducing the titular cat eating a fish it has just flipped out of a barrel on a quayside in 1920s Algeria. In Disney, animals don’t eat animals. Shortly afterwards the cat will also eat his mistress’s parrot and instead of choking on the feathers will pick up the power of speech from the dead bird.

The Rabbi’s Cat. It’s the title of the movie and, given that the cat has picked up the power of speech early on, it looks like it’s going to be the subject of the movie too. Wrong. That’s the owner of the cat. Not even really the owner of the cat but the father of the cat’s mistress, the rabbi, a gentle soul trying to make his way in French colonial Algeria, where there is obvious anti-semitism – he can’t get served in the high end, colonists-only café – but on the whole people rub along, Jew and Muslim and Christian.

What little plot this film has involves the arrival of a Russian Jew hidden inside a shipment of books saved from certain destruction by Soviet communists and the Russian’s revelation/declaration that there are black Jews in Ethiopia and that they need to be sought out and brought into the fold of international Jewry and pronto.

This leads to a mission, an overland trek in an old Citroën Half Track, involving the rabbi, the Russian, the rabbi’s “cousin”, who’s a Muslim, plus the cat, who has almost been relegated into the background, his status – star of the show or ornament? – ebbing and flowing from scene to scene, much as his ability to speak seems to come and go.

The main thrust of the action concerns this trip to Ethiopia, with adventures and encounters on the way, but there are also moments when the action shifts back to base, where the cat’s young mistress, Zlabya, is negotiating the foothills of womanhood while her father’s cousin, a Robinson Crusoe-style wild man who’s just blown in from sub Saharan Africa, struggles to make any headway in this story at all.

Through it all religion good/fanaticism bad is the big idea – there are fanatical Jews and Muslims, even a fanatical liberal humanist in the shape of a libertine, drunk, abusive older Russian. Just when you think zealous Christians are coming out of this more or less OK, Sfar and Delesvaux drop in a surreal digressive cutaway in which Jews are shown being put to death in a pogrom by antisemitic Russians. Done almost as a comedy. It’s surreal.

Race is dealt with when the young Russian falls for a black waitress in a bar. Feminism arrives in the shape of Zlabya’s ongoing struggle to be taken seriously.

It can get a bit programmatic, a bit didactic, as if the message is in the way of the story. But which message? There are quite a few vying for attention.

In the end it turns out to be all about tolerance. “God is a decent guy,” says the rabbi’s friend/cousin Mohammed at one point. That is the film’s big takeaway, and in a world where we’re constantly being encouraged to adopt a siege mentality it adds a welcome bit of balance, though sometimes, it must be said, it struggles to be heard.


The Rabbi’s Cat – Watch it/buy it at Amazon