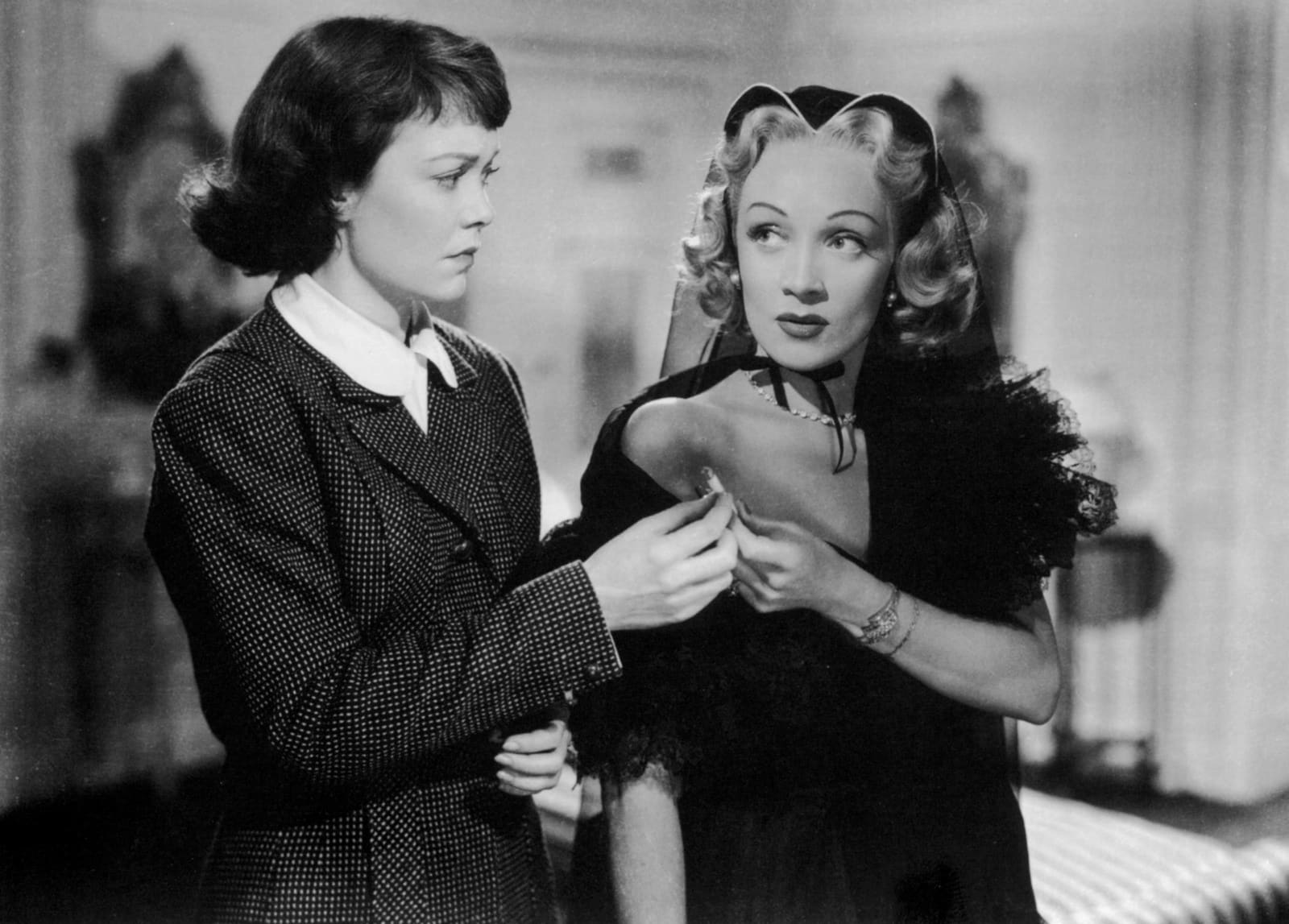 When the conversation turns to Alfred Hitchcock films, Stage Fright doesn’t often come up. Notorious, Psycho, Strangers on a Train, The 39 Steps, North by Northwest, Vertigo and even The Birds all regularly make an appearance. Stage Fright not so much.

And yet it’s a fascinating film, not least because in it Hitchcock tries to do something different with his formula. All the usual elements are here – the innocent man, mistaken identity, flat-footed cops, the mystery blonde – but everything has been given a distorting twist, inside a movie which itself is set in a world with a distorted relationship to reality, as if all the characters in it have somehow become aware they are actors playing roles.

Relationships between the characters are all skewed too. Jane Wyman plays Eve, the student actress trying to shield Jonathan (Richard Todd), the man she loves, from the long arm of the law, after he’s been caught, apparently red-handed, trying to help the woman he loves, a famous actress, escape a murder rap.

In a notorious “lying” flashback, Hitchcock presents the “truth” of what happened at the scene of the crime and then spends the rest of the film taunting the audience for having taken this flashback at face value. This infuriated audiences and critics in 1950 but now looks like a masterstroke of plotting by Hitch (and his screenwriter wife, Alma Reville), who are making this film at the same time as Rashomon, the film that supposedly rewrites the book on truth and lies.

A murder-mystery, thriller-chase, suspense movie in the Hitchcock mould is what we get, but Hitch does it all as if through a fairground mirror, as a farce, and has brilliant comedic actors like Alastair Sim and Sybil Thorndike (every second on screen majestic) as Eve’s father and mother – a couple who live in semi-estrangement (another skewed relationship). There’s even a brief cameo for British comedy legend Joyce Grenfell, squeezing her scant screen time for laughs, none of which are in the script.

Talking of distortion, playing the famous actress Charlotte Inwood is Marlene Dietrich, dressed in Dior and at maximum vamp. She directed the lighting of her own scenes herself and never looks less a million dollars (a fact that put Wyman’s nose way out of joint, apparently, since she has top billing). As Hitchcock later waspishly commented: “Marlene was a professional star. She was also a professional cameraman, art director, editor, costume designer, hairdresser, makeup woman, composer, producer and director.”

He lets her have her head. He even gives her a couple of very Dietrich-esque musical numbers. In any other film it would bend things right out of shape but in Stage Fright things being bent out of shape is kind of the point. Truth and lies, acting and reality, backstage and front of house, all are up for grabs. There’s even a scene where Eve beckons her father outside so she can have a private word with him away from solid Jonathan. “At last,” he says theatrically, “we are alone and unobserved.” Who says something like that? Alastair Sim might as well have winked at the camera.

Wyman in her early 30s looks older than Dietrich in her late 40s, but is fine if a touch overwrought as the naive but plucky Eve. Todd does dependable and vulnerable rather well, until he’s required to volte-face in a hurry. And Michael Wilding brings his own brand of dashing, very British leading man good looks to the role of the detective who doesn’t seem to be in a hurry to crack the case.

The entire film is a meta joke. Hitchcock is playing with his own tropes and iconography, and seems to be enjoying himself, perhaps because he’s back in England, where he hadn’t made a film for ten years. Meta at more than one level, too. Hitchcock’s daughter Patricia was studying at the Royal Academy of Dramatic Art at the time – where Eve is also meant to be a student – and turns up in a cameo as a RADA student called Chubby Bannister. A girl you can lean on, quipped dad.

Hugely enjoyable though it is, it’s better as a meta joke than it is as a movie. The audiences and critics of the time do have a point. And the crunching of gears as it changes out of farce and into thriller towards the end is deafening. Still, there’s lots to like, and how often do you see a woman as the hero of a Hitchcock film? Maybe the notoriously misogynist Hitchcock thought that was too funny an idea to pass up.

7.0
Director: Alfred HitchcockWriter: Whitfield Cook, Alma Reville, Selwyn JepsonStars: Marlene Dietrich, Jane Wyman, Richard ToddSummary: Jonathan Cooper is wanted by the police who suspect him of killing his lover's husband. His besotted friend Eve Gill offers to hide him and Jonathan explains to her that his real lover, actress Charlotte Inwood is the real murderer. Eve decides to investigate for herself, but when she meets the detective in charge of the case, she truly falls in love. —Col Needham <col@imdb.com>