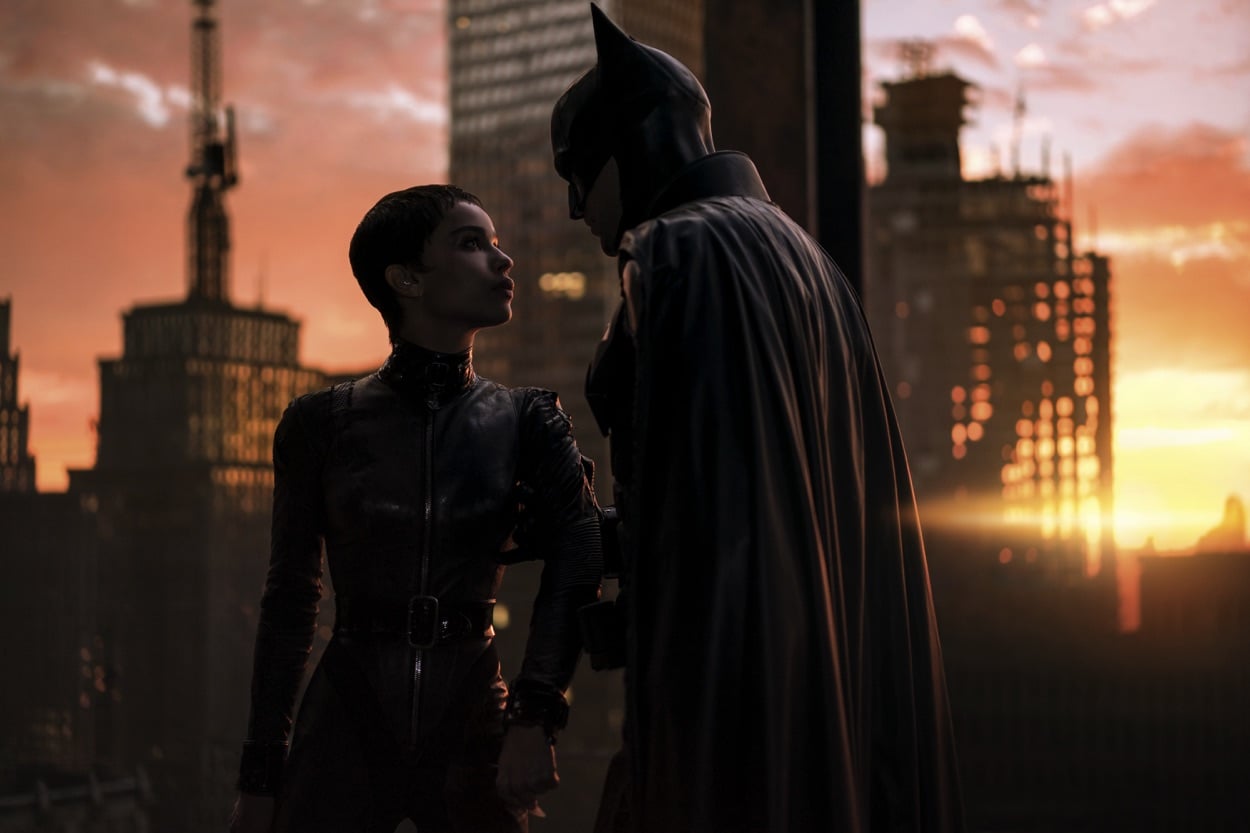 The Batman. Let’s get the plot out of the way first, since it’s the most straightforward aspect of the latest bulletin from Gotham City. A caped crusader, a trio of villains in the shape of Paul Dano’s Riddler, Colin Farrell’s Penguin and John Turturro’s Carmine Falcone, a campaign of murder being waged against city officials. The mayor dies first, in the opening moments of the film, forcing Commissioner Gordon (Jeffrey Wright) to call in Batman – he rates the mysterious vigilante but no one else does. Along the way Catwoman (Zoë Kravitz) becomes involved, a good girl in this version, and a crimefighting sidekick, should Batman want one, which he doesn’t seem to. And possible love interest, again if Batman wants one.

As someone whose favourite Batmen are Adam West and Ben Affleck, this Batman is quite a challenge – RPatz as the caped crusader. In fact, as co-writer/director Matt Reeves discussed when news of the film first broke, the choice of Robert Pattinson brings some useful casting baggage with it. Like Bruce Wayne, Pattinson has grown up in public, has learned to adjust to great fame early on and has developed a strategy of dealing with the whole damn thing. In Pattinson’s case, just getting on and making films one after the other, starring in some, taking support roles in others, always aiming to do decent work – the jobbing actor. As for this iteration of Bruce Wayne, the poor once-orphaned billionaire has become a recluse, allowing his alter ego, the masked near-psychopath Batman, to represent him.

Bigger, darker, more gothic. There, I said it. It’s been the standard line on all the Batmans since Tim Burton re-invented the character for the screen all those years ago. And somehow, Reeves has managed to find a way to make his Batman – The Batman, goddamit – even more sombre, gigantic and stygian.

But beneath all the murk, The Batman is a plea for a return to normality. For governments to govern, for city officials not to be corrupt, for Batmen to be allowed to go about their crime-fighting business. Intercession is its overarching idea – what is Batman but an intermediary in the whole process of crime and justice? – and composer Michael Giacchino makes this clear with his choice of musical theme, Schubert’s Ave Maria, a sung prayer beseeching a higher authority to pray for us, help us, now and at the hour of our death.

If Christian Bale was the growling Batman, Pattinson is the whispering one, a 1970s Clint Eastwood calmly and impassively going about his business with narrowed eyes, while his villainous opponents function almost as Scorsese criminals – they’re gangsters more than anything else, most obviously in the shape of Turturro’s Carmine Falcone, the goodfella crime boss. As for the other two, there is no Lycra or fancy attire here. Paul Dano’s Riddler wears a kind of gimp mask with spectacles and is a creepy and original re-invention of an old favourite. Dano refers vocally to Frank Gorshin’s Riddler (Adam West era) a couple of times, but otherwise this is all his. Colin Farrell, unrecognisable under the latex, is a much more straightforward bad guy, a hoodlum. For all Farrell’s brilliance in the role, Penguin suffers from the same affliction as Falcone. The unwritten rule of Batman states that there’s only really room for one fleshed-out villain in each story, and this time out it’s not him.

For all its fantastic parts, the actors, the acting, the set design, The Batman is a lumpy and formless whole. There is no real story. It’s a fairly event-free zone, and largely comprises Batman turning up at the scene of a crime, not saying very much, and then standing there like a big lump before heading off to glower at the scene of yet another crime. At various points we see that Bruce Wayne also wears black eye make up beneath the mask, to complete the effect. Along with Pattinson’s floppy longish hair dyed dark, it’s tempting to see Wayne as a shut-in emo kidult, a My Chemical Romance fan who’s never quite grown up. Bruce Wayne has daddy issues. So, too, does Catwoman, we later learn. So, almost inevitably, does Riddler. Penguin, Falcone… this isn’t their story.

It’s a fascinating film rather than a really entertaining one, never boring but oddly not gripping. It’s probably worth watching more than once, not least to drink in Reeves’s stylistic borrowings from epic movies of the silent era – all those vast tableaux, a colour palette tending to the monotone, cameras far more static than usual. This is only fitting – 100 years ago, in his mask and cape, Douglas Fairbanks invented all this stuff with The Mark of Zorro, after all.


The Batman – Watch it/buy it at Amazon