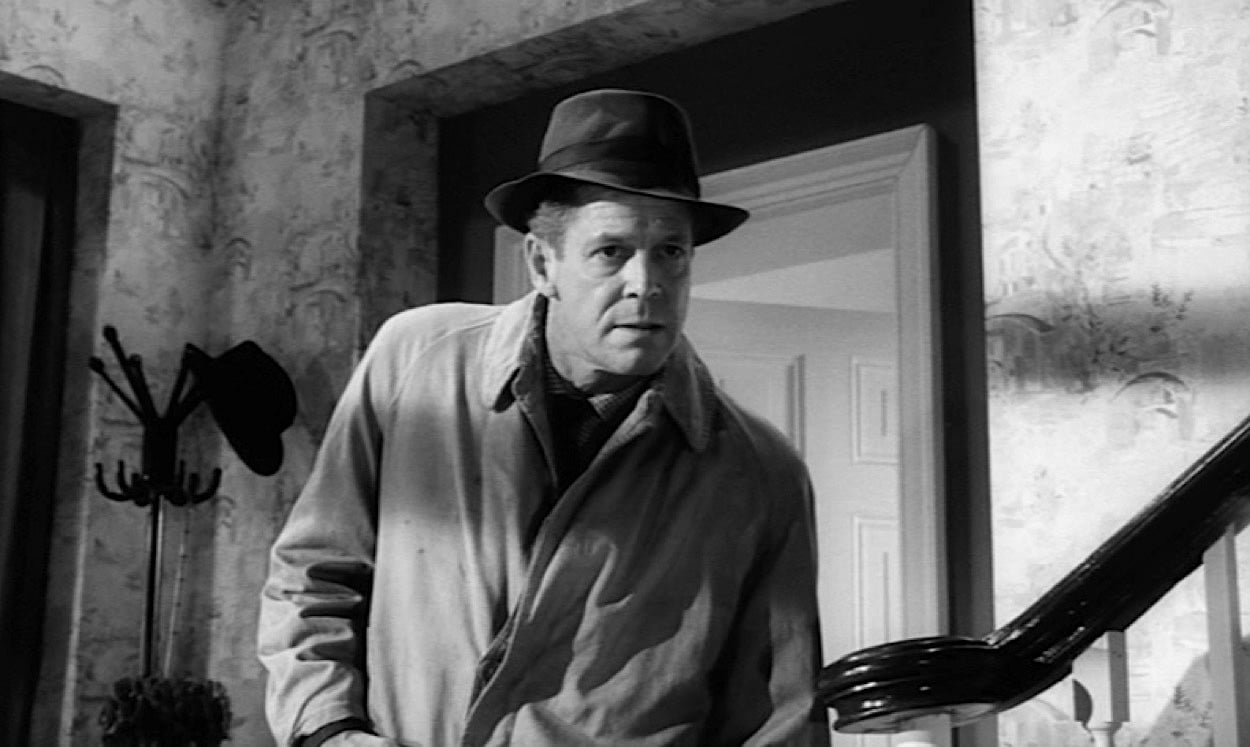 Walk a Tightrope, a British B movie from 1964 packs more of a punch than you might expect, thanks to a properly ingenious story and a great performance by Dan Duryea, who adds the all-important element for British B movies of the era, a starring role for a second-string American actor at the tail end of his career.

Duryea was 57 when this was made and looks older. Often cast as a villain, this “heel with sex appeal” (as the New York Times called him in his obituary) would be dead of cancer within four years and looks gaunt here, so maybe it was already taking its toll on his health.

His appearance doesn’t hurt this strange combination of the kitchen sinker and the noirish thiller, which starts out in a drab bedsit where silly and stupid Maisie (Shirley Cameron) is trying to appease her surly, exasperated and broke man, Carl (Duryea) with offers of a nice bit of steak.

Carl has other plans and beetles out on “a job”. He’s a hitman, unbeknown to Maisie, and is soon shadowing Ellen (Patricia Owens), a hoity toity blonde with a husband who will wind up dead before too long. Apologies for the spoiler, but it happens really very early on, and in any case Ellen’s husband, Jason (Terence Cooper), is so uxorious he’s clearly being lined up for something.

Who done it? Carl, obviously, but the interest comes from Carl’s later insistence that Ellen contracted him to do the job, and that she owes him the money for it. Ellen, for her part, is the butter wouldn’t melt sort – good casting of Owens – and puts up a stout defence that she has no idea what Carl is talking about. And even though it’s obvious something doesn’t fit in Ellen’s story, the plot’s ingenuity is such that it keeps her in play right to the end as the innocent party who might be guilty, or the guilty party who might be innocent, depending on whose story you believe.

Duryea is particularly good and oozes seediness, but it is notably a good cast all round – Shirley Cameron as the way-too-eager Maisie, Richard Leech as the avuncular friend of Ellen’s husband, a man with too keen an interest in Ellen, Trevor Reid as the cop on the case, Inspector MacMitchell, a finicky but smart detective who seems to have swallowed the old world manners and speech patterns of Wilfrid Hyde-White. As said, Owens is good casting – is she bad, is she not? – even though her accent doesn’t quite mark her as an American in London. Owens is in fact Canadian, but sounds like a Brit.

Nor does the plot quite add up, and the more you think about it, the more “hang on a minute” moments you are likely to find. And there’s also a protracted courtroom sequence which strains credulity but does give Duryea an opportunity to show us some more aspects of his skillset.

Quibbles, really, because there is a nice ta-daa reveal which you might see coming if you’re the sort who tries to work these sort of things out.

Added interest come from the London locations – Westbourne Grove early on, though the bulk of the action takes place down on the River Thames, at Strand on the Green, a nice part of town now with some fine riverside pubs, and Isleworth, further up river, where The London Apprentice pub features prominently (it’s still there today).

It’s noirish-ish rather than noirish – too brightly lit, too well spoken, too well appointed to really make the grade, though the suspect motivations of almost everyone involved do fit the ticket.

At one hour nine minutes it doesn’t hang about either.

Walk a Tightrope – Watch it/buy it at Amazon

Director: Frank NesbittWriter: Neil McCallum, Mann RubinStars: Dan Duryea, Patricia Owens, Terence CooperSummary: Ellen (Patricia Owens) is happily married and very much in love with Jason (Terrence Cooper), but she is being blackmailed by her former husband as their annulment had never gone through. She sets up a complex plan with a hired gunman, Lutcher (Dan Duryea), to kill the ex-husband when he comes for some more money, but the current husband comes in unexpected and Lutcher, not knowing one from the other, kills him. Oops! —Les Adams <longhorn1939@suddenlink.net>