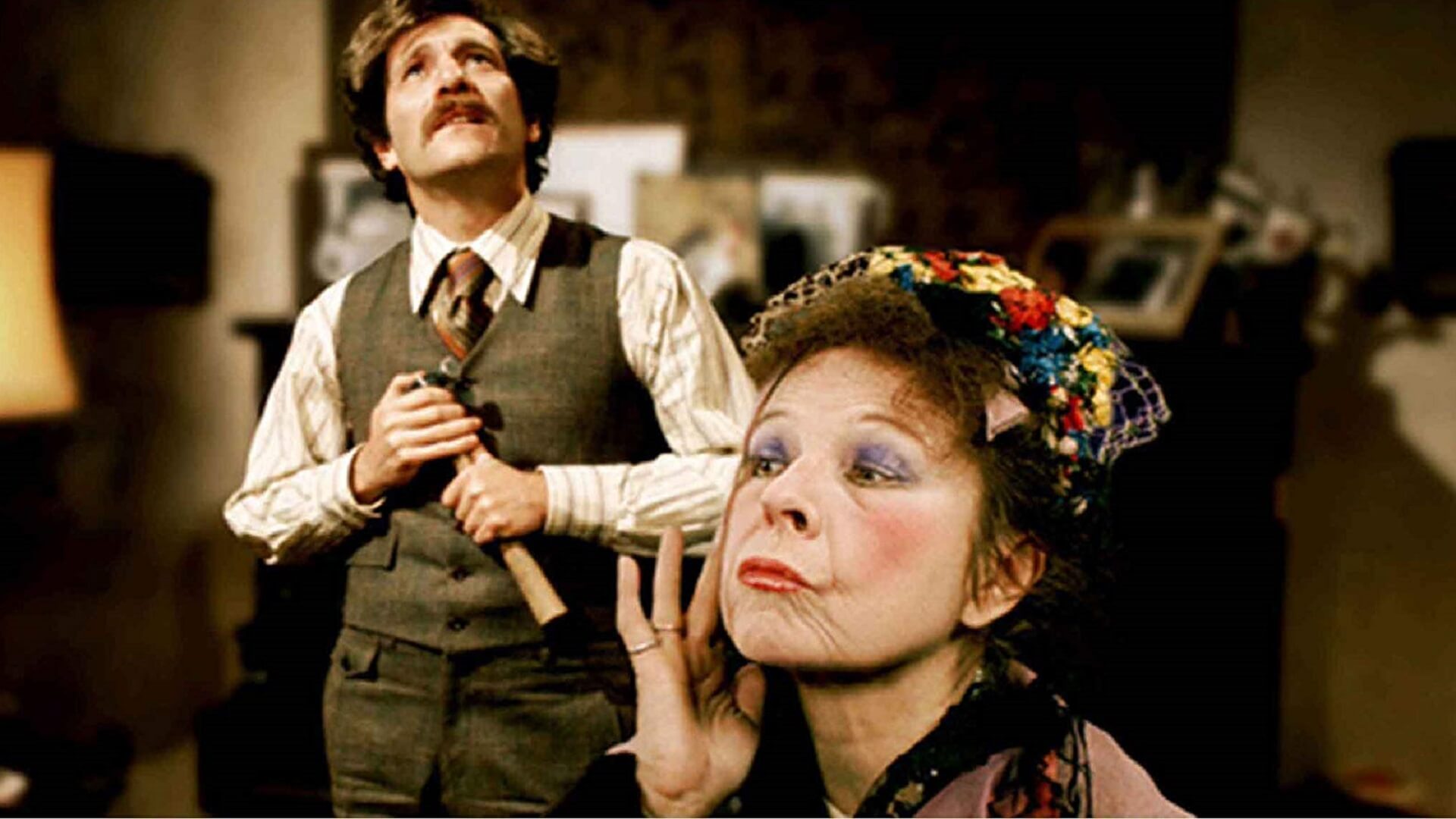 Running on the same fuel as the UK comedy Steptoe and Son (or the US version of it Sanford and Son), Where’s Poppa is the story of a would-be suave, would-be lothario constantly being thwarted by his aged parent.

George Segal plays the New York guy keen to spread his wild oats. Ruth Gordon is the insufferable mother he shares an apartment with, a woman who’s gone senile, or is maybe just making out she’s senile the better to thwart any chance of happiness for her son.

It’s a loose-cannon story tracking the efforts of Gordon (Segal) to introduce a new nurse, Louise (Trish Van Devere) into the household, his mother having chased all the other ones away. Gordon has instantly come down with a bad case of the hots for Louise, which complicates matters, and when his mother rears up and starts misbehaving, Gordon calls on his long-suffering brother, Sidney (Ron Leibman) to intervene. This involves Sidney crossing the park, sometimes in a gorilla suit (Going Ape was an alternative title), and always getting mugged by the black guys who hang around waiting for Sidney to show up, which he always does.

Often misdescribed as a black comedy it is in fact a comedy of bad taste – the difference is that black comedy never lets on it’s comedy; this most definitely does.

Still, George Segal and Ruth Gordon, both at the peak of their powers. Segal could do anything and was on a run of hits straight and comedic. This had got going with 1965’s Ship of Fools, a now somewhat forgotten drama nominated for eight Oscars. The same year came King Rat, the perennially popular PoW drama. And the following year another hit – Who’s Afraid of Virginia Woolf, in which Segal was up against Richard Burton and Elizabeth Taylor screaming abuse at each other for an entire film but still made a mark.

Ruth Gordon, an actor and writer, had been successful in a less obvious way since the silent era. Two years earlier she’d won an Oscar for Rosemary’s Baby (her acceptance speech is one of the greats) and one year later she would star in Harold and Maude, the enduring Hal Ashby May-to-December comedy it would be impossible to imagine without her.

The director here is Carl Reiner, the comedy writer who’d created The Dick Van Dyke Show – a comedy about a comedy writer, so decades ahead of the self-referential shtick of Larry David or Ricky Gervais. Free from the puritanical constraints of TV, Reiner is keen to get onto the big screen all the material he’d not been allowed to get away with on the small one. Sexual, profane language, with, so the IMDb trivia section tells us, the first celluloid appearance of the word “cocksucker”.

But mostly Reiner and his writer Robert Klane are trading in the comedy of inappropriateness. Gordon is a lawyer and Reiner and Klane stage some very funny early scenes in the courtroom (one featuring Rob Reiner, Carl’s son) where things are said that shouldn’t be said (here’s where the “cocksucker” comes in). The scenes between Sidney and his wife (Rae Allen), where Sidney threatens to strangle one of their children if she won’t let him to go Gordon’s aid. The one where Gordon shouts at his mother, “if you mess this one [Louise] up for me I’m going to punch your fucking heart out”. And the one where the cantankerous mother tries to take off Gordon’s trousers in an attempt to intimidate Louise into leaving. There’s more, much more.

The scenes beween Sidney and his wife are some of the funniest – as if Dick Van Dyke and Mary Tyler Moore had gone bad – and if only there were more of them. Also funny but more troublesome are the scenes between Sidney and the black guys in the park, a strange crew of squeaky-voiced, finely-apparelled dudes who seem to be playing with Sidney rather than really mugging him. These scenes are the ones most likely set contemporary triggering flags aflutter, though Reiner and Klane seem to realise even back then that they were walking (stomping) into a minefield. As some kind of compensation, one of the black dudes gets what must be the film’s funniest gag, a Larry David-style joke so inappropriate you might wonder if you imagined it.

All done in that fast-paced New York Jewish way with all the lights on, TV style. Farcical. Screwball. Some great jokes. Some sudden jolts back into the real world, like when Gordon visits a care home for his mother and has his eyes opened. And then it ends. Suddenly and seemingly out of the blue. The original ending was too much for the studio. Incest had been suggested. Inappropriate to the last!