Inspired by the Latin American practice of secuestro express – or quickie kidnap – the Venezuelan Jonathan Jakubowicz’s debut feature tracks a miserable night in the life of a rich Caracas couple (Mia Maestro, Jean Paul Leroux) after a wild night out of partying ends with abduction at the hands of a trio of gun-happy barrio gangsters. We’re then with the couple and the banditos until the woman’s father (played by Rubén Blades) coughs up. And as the night of brutality wears on, nuance starts to push its way through what at first looked like stereotypes. Maybe our gangsters aren’t so bad; maybe our heroes aren’t so heroic. It’s a garishly lit thriller, feels coke-fuelled and features a number of camera tricks Guy Ritchie probably thinks he has a lock on. Talky? Just a bit – someone’s been watching Tarantino as well (but then who hasn’t?) – though this is in the main a fast-moving, good-looking thriller that knows how to wind tension up and down. As an added bonus there are at least two deliciously audacious plot twists that mark Jakubowicz as a man to watch. 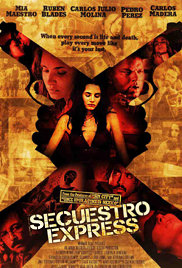 Director: Jonathan JakubowiczWriter: Jonathan JakubowiczStars: MÃ­a Maestro, Jean Paul Leroux, RubÃ©n BladesSummary: In a night pregnant with a strange mix of tension and dizzy abandon, lovers Carla and Martin prowl clubs before drunkenly wandering back to his car. While he comes across as crass nouveau riche, she appears more liberal. Their conspicuous affluence, however, makes them ideal targets for kidnappers, and the trio of Trece, Budu and Niga gets a bead on them and promptly sweeps them up at gunpoint. The kidnappers then demand $20,000 to be delivered in two hours. Carla phones her rich father Sergio to procure the money, but chaos soon ensues. A botched ATM robbery is followed by a stopover at the palatial estate of a gay drug dealer. Written by Sujit R. Varma